I’ve always considered myself to be more of a stream outdoorsman, but living in Alaska you are given so many opportunities to play in the field as well. I recently, last weekend, took up one such opportunity and borrowed the school’s snow machine and joined Mr. Smith (6th grade teacher) on a x-tundra adventure to hunt some ptarmigan. Ptarmigan are kind of like grouse in their size and appearance. They are all white except for their black/brown head and black tail feathers this time of year. 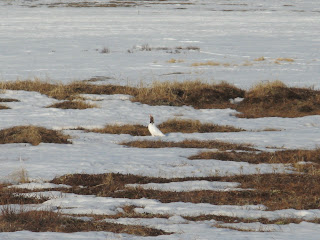 If you read my previous post, I mentioned doing open water crossings on the snow machines. Following Marty (Mr. Smith) out of the village, we had to do a couple of open water crossings. Obviously we try to stay in the snow or sometimes on the bare ground most of the time, but Marty all of the sudden gassed it across a short section. Once on the other side, he gave me the “wagons hoe” signal, so I gunned it and crossed my toes. I made it across. It’s amazing that if you go fast enough, you can float across the water if you are going fast enough.

We made it out to the Alaqucak river valley and found many ptarmigan flying around. I had borrowed a friend’s 20 guage shotgun and Marty had his 22 with a scope. The shot gun I was using had a plug in it that made it only a one shot shooter, meaning I had to be very accurate when I shot. To put it bluntly, I can’t hit the broad side of a barn. Anyway, the gun jammed and we couldn’t use it after the first shot. Therefore, Marty and I took turns with his 22 and still managed to bag 17 birds. I took 5 out of the air, which I was proud of. We had about 30 pounds of birds in my little back pack which was bursting at the seams. 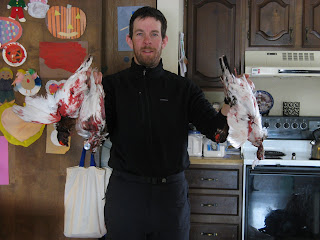 That night, I cleaned the birds and cooked up a couple making a little ptarmigan stir fry, which was very good. Ptarmigan is all dark meat, but it was tasty non the less. Looks like I’m going to be in the market for a 22 rifle for next year. Fishing and berry picking in the fall. Ptarmigan hunting in the spring. I never knew how it felt to leave off the land so much. It is a pretty rewarding feeling. Of course, so is ordering all your groceries on-line and having them delivered to your door step.
Either way....Bon Apetit
Posted by Dirk Martin at 1:04 PM No comments: 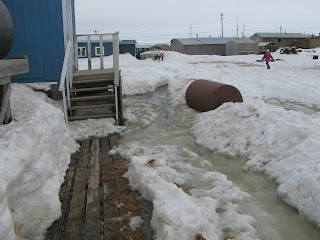 So it’s starting to really thaw and run big streams of water everywhere through town. My front yard is a total bog even after I created the levy you see here through the snow. It took two attempts to complete it and even a little from some of my former students. The water has been flowing steady for about a week now, and there is still tons of snow throughout the village.

Even the bay is starting to look as though it might break up soon. Of course there are still crazy teenagers that try to go across the spans of open water by hydroplaning on 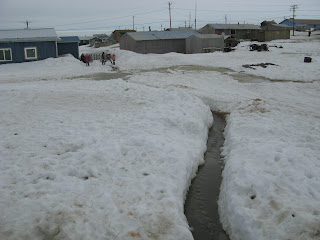 their snow machines (snowmobiles). I actually experienced some mild stream crossing, but that will be another story for another time.

In all reality, the bay won’t break up for another week or so. There is a lot of frozen water out there. The men have been heading out to go seal hunting for over a week now. Students are allowed two traditional leave days in which case they get an excused absence to go hunting for their family. I guess you would see that anywhere 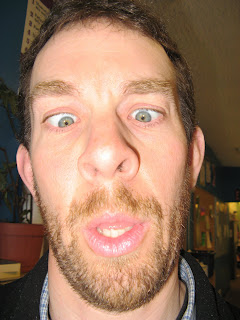 you lived that offered wild game to hunt or fish.

As for me, I’m just about to have a melt down of my own as you can plainly see.
Posted by Dirk Martin at 9:19 AM No comments: