So the temps have been in the teens and single digits bringing everything to a very solid state. We haven't seen much precipitation however, which means that is perfect riding weather. I have tried to take advantage of this situation as much as possible by charging up my head light and getting out everyday for the past 5 days in a row. Katja hasn't had any objections. 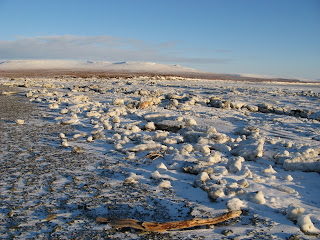 Here are some pics of our latest ride. Might I add that even though the studded ice tires are an improvement for riding in these conditions, it is still pretty terrifying to go screaming across sheets of ice at 15 - 20 mph. This picture is the piled up ice chunks at the mouth of the Alaqucak River. It was the first time I had been out to the mouth all fall. It's amazing how much easier it is to travel over frozen tundra than soggy, marshy, boggy tundra. 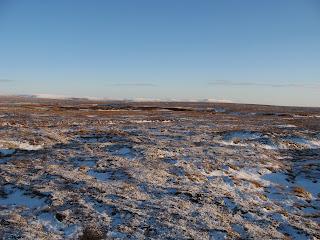 The terrain out here is pretty ...... uneven to say the least. Occasionally I have to break trail over fresh tundra to get where I need to go. This is what typical frozen tundra looks like.

The bay is almost frozen, but it is at it's most dangerous time. One of my main concerns is keeping Katja off the ice, so that she doesn't fall through. This trail followed the coast gave us a nice view of the frozen coastline.

Here are some pics of the trail going up the hill. I usually always pass some snow machines going up or down the hill, which are usually accompanied by strange looks. This is Katja's favorite ride, because she get 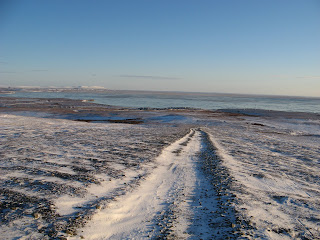 s to race me back down the hill after we climb it. She really becomes quite a handfull when she decides I'm going too slow. She begins barking, growling, running in circles, and occasionally nipping or clawing my legs to get me moving faster. Even on the downhills, I can't go fast enough. On conditions like these, I don't want to go fast enough.

I'm sure that when I return from Christmas, there will be too much snow for riding outside on the hill. Katja will hopefully be ready to don her skijoring harness again.

Until next time, I thank you for reading and wish you a very happy holiday season.

Staying true to the blog

I realize that the title of my blog is “Teaching in Toksook”, however I don’t really talk about my teaching that much. It’s not that I am embarrassed about my pursuit of becoming an effective teacher, it’s just that I find more creative energy after a hard days work, thinking about recreational pursuits instead.

Anyway, I thought I would tell a quick story about an experience that my class shared. We were playing a game, similar to Taboo, to reinforce vocabulary. One student stands at the front of class with a small stack of index cards, each one with a vocab word on it that only the student can see. The student can say anything they want, except the word on the card, in order to get another student in the class to guess the word on the index card. I kind of stand off to the side in case students need a little hint of a clue to give the class. Some of the words can be difficult for students to understand well enough to give decent clues. On this day, the student turned to the first index card. The word was “plural.” A giant smile grew on her face and I could tell that she knew what the word meant and was about to give an excellent clue. She opened her mouth and very confidently, yelled “Kittens!” There was a brief silence and then I immediately started to convulse with laughter. This was soon followed by the rest of class, as well as the student herself. I think that everyone realized that there were many words she could have chosen, but she picked something very cute, girly, and completely random. I still smile when I think of that moment and occasionally I remind her of that humble moment. She still laughs about it as well. I guess you had to be there.
Posted by Dirk Martin at 11:52 PM No comments:

Here are some more pictures of Katja and I skijoring. Our friends Kevin and Foster were out with us and snapped a couple of photos while taking a short break.

Here are some more random photos of Katja playing with her toys. Personally I do not like staging photos and prefer more of a candid style of photography, so I’m thankful that my camera was close by and that Katja didn’t jump up to see what I was looking at.
Posted by Dirk Martin at 11:37 PM No comments: 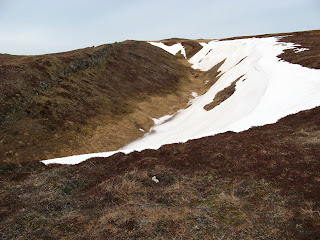 Yes, it’s true. The ground wasn’t even frozen on Dec. 1st due to a strange warm spell that hit the SouthWest region of Alaska. Strong winds from the south, gusting sometimes up to 70 knots hit Toksook Bay and other parts of the region for a period of 3 – 4 days and melted almost everything, minus a few patches of really deep snow in the valleys. This also meant that the mud returned for a short time as well. Everything was pretty soggy and muddy for a couple of days. I was tired of mud back in September, so this was particularly hard for me to take. Katja needed her paws wiped before entering the house again. That is a drag for both of us.

But it is Alaska and Old Man Winter couldn’t bear to see one of his favorite parts of the winter world bare of snow. On Dec. 1st, Old Man Winter took a deep breath, the winds switched to the North, and the temperature dropped form 37 degrees to 15 degrees in about 5 hours. You could almost see the thermometer moving.

On Sunday, the 2nd, I did manage to get out on the Mtn. Bike again and ride a circuit trail that I had been meaning to all fall. The ground was frozen pretty good, but large puddles were still unpredictable and often I broke through. A couple of times, I got into really soft and watery tundra and had to dismount in 12 inches or more of water. Once I even buried my front wheel up to the axle. Should have gotten a picture of that, but I forgot in the a 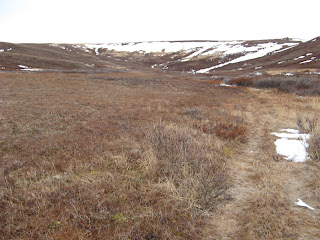 mazement that I didn’t go for a mud swim. Katja and I had a blast though. We didn’t see any fox, which was probably disappointing for her, but good for me, because I didn’t want Katja going after wild animals that could bite back. I didn’t break my bike. I didn’t break my person, although I came close a couple of times. We didn’t freeze or get lost. All in all, it was a good trip.

The temps haven’t been above 30 degrees since then and hopefully it will stay that way until late March. Okay, I’ll take a couple of days at 35 degrees. I was hoping that the bay would freeze and I would be able to start ice fishing before Christmas, but alas, I will have to wait until I return.

Two and a half weeks until I return to Maryland. I hear that it’s been snowing in that part of the world as well. It’s funny, I really like living in the snowy parts of the world. I hope to see you in the snow.

Dirk
Posted by Dirk Martin at 11:17 PM No comments: