The house is packed up. My classroom is cleaned, electronics wrapped in plastic, walls are cleared, desks are pushed to one side of the room. My computer is about to be returned and given a clean sweep (re-imaged). I need to make a trash run to the dump with all the junk I"ve accumulated in my house. All of my packed things are hopefully going out on a plane tonight, before I actually leave. It will be waiting for me in Bethel, where I will send it on to EEK.

tonight will be left over pasta, some old re-runs of "Scrubs" and then falling into a peaceful slumber in my sleeping bag. It is always such a rush to finish up at the end of the year. I feel like I've been chasing my tail.

Our site-administrator, TJ, and his wife, the science/math teacher, Kim are also leaving Toksook. The animosity in the village has reached its pinnacle with a couple of people (20 or so) that are dissatisfied with TJ's performance as site administrator. Thus, he is being asked to leave to eliminate any further animosity or possible action against him from the few dissatisfied people in the community. It is really a mess. Most of the community and all of the school staff are very upset that TJ and Kim are leaving Toksook. They will leave a gigantic hole within the school that will be ver 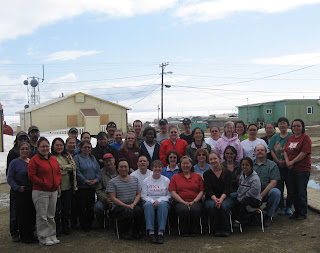 y, very hard to fill. TJ and Kim both got jobs in Napaskiak, which is only 20 miles north of EEK on the Kuskokwim River. It will be nice to stay near them.

I'm definitely going to miss Toksook Bay and the friends that I made here. It's been kind of difficult talking to people and explaining why I'm leaving, but everyone has wished me the best of luck and hopefully a more satisfying teaching position in EEK.

But, come August 11th, we will all be re-united at the district in-service in Bethel. See you all there. Have a great summer!

Dirk and Katja
Posted by Dirk Martin at 3:22 PM No comments:

That's right! I've made the executive decision that I will continue my work in the Yukon-Kuskokwim Delta educating young minds and becoming more and more Yup'ik. I won't be in Toksook this year. Instead, I've transferred to a smaller village right off the Kuskokwim river, about 35 miles south of Bethel, called EEK.

Things that won't change
Things that will change
Anyway, I'm happy with my decision so far. I figured that I won't be stressing about finding a job in the lower 48 with the collapsing economy. I've heard many horror stories about school districts cutting the number of teachers they have and cutting budgets left and right. I just signed a contract today for next year, so my job search is over for a while.

It's May 12th and there are 7 more days of school left. Spring is fully upon us 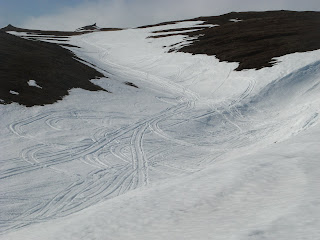 and there is a lot of meltage occuring all around us. Many of you who read this are not used to seeing snow around your houses this time of year. Heck, my Dad has been telling me about all the great fishing he has been doing all ready. Well, up here, the ice still locked in the bay and fishing of any kind is weeks if not months away. There is still enough snow (corn snow) to do some skiing if you are willing to work to get to i 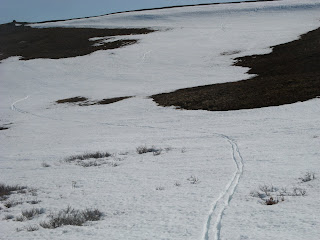 t.
Today, I hiked up over the frozen, but thawing tundra to find a couple of short runs that allowed me to make some turns on my back country skis. I probably looked like a crazy person hiking up the hill with my skis on my shoulder, but it turned out to be a lot of fun. Katja was even able to catch herself a little tundra mouse appetizer before dinner.
I would have to say that I definitely earned the runs I made down the hill. The walk to and from the skiable areas was long and soggy. Sure my hands and feet were wet by the time I got back, but it was worth it. Parts of the valley are full of water that has been running off the top and filling up areas in the bottom creating a dirty ice bath. I avoided those places. 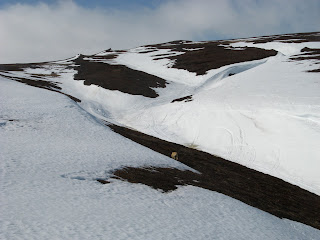 Pretty soon, all the snow is going to be gone except for the highest points of land and the deep valleys where the wind packed snow 20 - 30 feet deep. Maybe there will be some snow 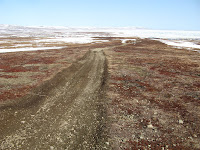 still here in August. Personally I won't ever know and I'm okay with that.
Posted by Dirk Martin at 7:30 PM No comments:

Well, so far, I have packed up all my art work (4 paintings), two boxes of books, 3 tubs full of camping gear, clothes, and fly tying materials, my guitar, my bike, tool box, and random bike accessories. I've given away a tent, a sleeping mattress, a fly rod and reel, and some movies. I plan on taking part in a garage sale type event, where I hope to make a little dough.

When I leave here, I plan on traveling with two tote bins, my backpack, dog and dog kennel, and my carry on bag. Anything else gets thrown away or given away. I don't need it.

Travel light, live light, share the light, be the light

Dirk
Posted by Dirk Martin at 9:25 PM No comments:

Alaska is a difficult place to live in for most of the year and during the winter especially, but the in between seasons are my least favorite times of the year. Fall and Spring. In the fall, the rains turn everything into mud, which gets tracked everywhere. On top of that, when it dries, it turns into dust, especially in carpeted areas. Our whole school has carpet, except for the gym, so that level of dust during the fall in early winter gets pretty high in the school adding to sinus and respiratory problems.

The winter starts out by just getting cold. Tundra freezes solid as well as the rivers and coastal water. Then it starts snowing occasionally. There are a couple of warm spells here and there that melt some of the snow an 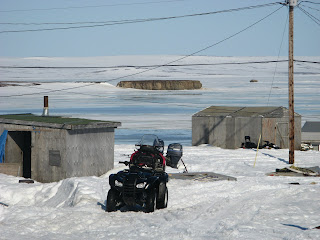 d bring back the mud temporarily. As the winter goes on, the snow levels increase and the storms begin rolling in bring strong wind storms and blowing snow.

In the spring, all that snow starts to melt. This year, the temperatures seemed to shift rapidly and the snow got soft very quickly and started melting away. The days become absolutely beautiful with blue bird skies and warm temperatures. As the snow gets soft, getting around becomes very difficult. Watching the 4-wheelers spin and slide around is quite entertaining. As there is more and more snow turning to water, the snow machines can be seen skimming across the water at full throttle, like jet skis. Walking however, is the most frustrating mode of transportation. At first, you can stay on top of the snow, but as the days go on, particularly later in the day, you start post holing. Post holing is when you break through the upper crust of packed snow 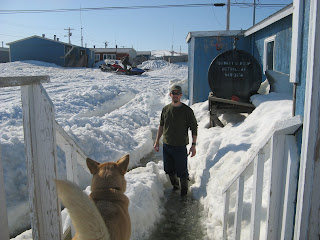 To combat this, I’ve decided to create some channels to let the melting snow, so the water could easily drain off the land. There is still too much snow for the water to drain completely, so there is a lot of standing water. But, I figure it’s better walk through water know what you are stepping into, as opposed to post holing unexpectedly. It’s a l 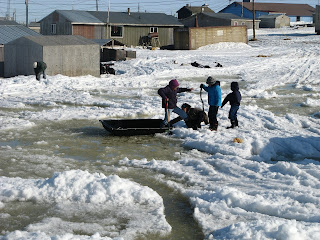 ot of work, but it makes life a little easier. The kids don’t let the multiple ice baths get them down. Eventually the snow will be gone and the mud will return. I hate mud. I really do.
Posted by Dirk Martin at 9:13 PM 1 comment: