This Christmas was extra special for the Martin family this year. As Dad and I were doing some Christmas shopping, Dad suggested that we swing by the Human Society and take a look at what kinds of lab mixes they had. I rarely pass up a chance to check out unwanted or abused pets that need a good home. As we walked around looking at the various mutts that were kenneled up some looking excited and friendly, and some looking wary and very skeptical, we saw 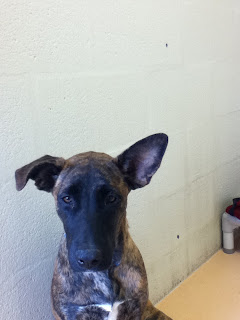 about three dogs that may fit the picture at the Martin household. Then I came across this scrawny but friendly African wild dog looking wiggling pup standing in the middle of her kennel trying to determine if she could trust me or not. About ten seconds later, she was pressing up against the chain link so I could pet her more. Then she sat back against the wall and waited to see who would come around and say "Hi" to her next. She had been in the kennel for about 5 - 8 days and had 2 - 3 p 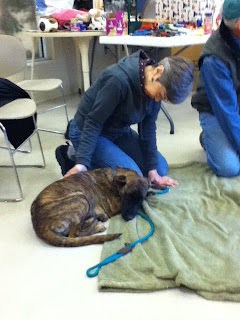 eople interested in her. My Dad agreed with my selection of a possible dog and we filled out the paper work for possible adoption.
Two days later, we brought both Mom and Katja back to visit her and see how everyone would get along. Holly, recently changed to Molly, had just gotten out of surgery, so she was pretty mellow. Katja had greeted her long enough to get annoyed with "in your face" puppy behavior. Mom really took a liking to her as well. By the end of our visit, including extensive paper work, she had officially become ours.
Molly has been at the house for almost a full week now and she is getting along 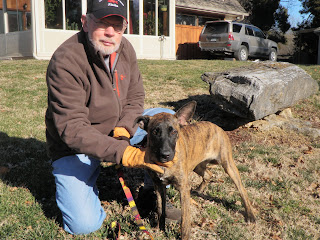 pretty well. Katja maintained her distance during this time and whenever annoyed would retreat to my bedroom upstairs to escape. Recently, they have been playing more inside and out. Poor Molly gets rolled over and over again as they tear around the yard. They have developed a mutual respect for each other. Molly has learned how to interact with Katja without getting snapped at and Katja has been much more receptive to Molly's p 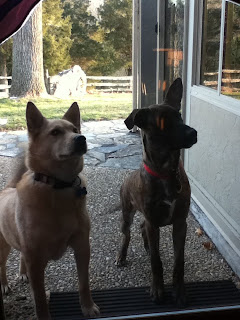 uppiness during the last couple of days.
Dad loves the dog because of her loyal nature and her level of intelligence. She now responds to "Molly" and will seat, stay, and heal pretty consistently. She also has a mellow nature and spends a lot of time either curled up in front of the fire place or stretched out in the sunniest part of the house napping or just observing the mindless interactions and goings on of us humans. She is learning that her kennel is where she sleeps at night and freely goes in on her own accord now. During the night, she still wakes up and starts whining and asking to get some attention. A quick reprimand, a little tough love, and she usually quiets down again. She still does have the occasional accident in the house, which is also troubling to my Dad. It's been 12 years since he has had to train a puppy. I won't say that "you can't", but it is "hard to teach old dogs new tricks." They do like to take a little nappy nap time each afternoon. Dad's best friend.
Posted by Dirk Martin at 7:28 AM 1 comment:

I love my Leatherman

Some of you may know that I am the proud owner of a snow machine (snow mobile) now, a four year old Yamaha Venture Lite. Some of you may also know that I don't always stay on the road, stay within the lines, follow the crowd. So last night, I decide to take my machine out and run Katja. It also goes without saying that my students have been excited to follow me on the new ride out over the frozen tundra. Luckily, one of my students decided to follow me last night. As I cruised out the trail, I decided to check out a little short cut that I noticed last year. As I approached the the little short cut, I noticed that it was drifted over and there was not a trail cut through the area as there was the previous year. I stopped to right on the edge of the drop off, which was only about 2 - 3 feet, and decided to back up and go around. Unfortunately, my "tank" of a snow machine didn't want to back up and started digging into the deep snow. So, the only other way was to plunge ahead and make for the best. Upon arriving to the scene, the first words out of my student's mouth was OMG - what have you done?

To make a long story short, I got stuck among the willows in the drop and had to use my student's assistance to run back to my house for a shovel and my leatherman. Returning to the disaster, I quickly cut the willows away from my machine with the saw of my leatherman and then did a little digging to where I could lift the front of the machine around, which enabled me to drive out of the ditch. I love my leatherman! My machine might still be in the ditch if I didn't the WAVE to help quickly clear and free it from the willow branches.

I imagine that most first time snow machine owners have done something stupid like this and had to learn from their experiences. I'm sure that won't be the last time I have to call on someone's assistance to get me out of a jam with my new toy. I'm just glad that I didn't roll it over. My Yamaha is very heavy and I don't think that I would be able to flip it right side up again.
Lessons for the day:
1. Keep the rubber side down.
2. Stay out of the ditch.
3. Always carry a leatherman.

Stay tuned for more adventure from ... Qasaq with a snow machine.
Posted by Dirk Martin at 2:33 PM No comments:

In mid-November, the Eek junior high and high school students started incubating salmon in the classroom as part of their science classes. For the first couple of weeks, the students just monitored the eggs as the embryos squirmed around inside. Keep in mind, at this stage, we could see the embryos, particularly their eyes, inside the eggs. Around November 28th, we started noticing some of the eggs hatching and alevin (salmon embryos) emerging. We currently have about 60 - 70 alevin s

quirming around the bottom of the fish tank. Some have swam out of the basket that holds the eggs in the tank. Many are still mixed in with the remaining eggs that haven't hatched yet. The early hatching of the eggs came as a little bit of a surprise. We were anticipating the eggs hatching around the middle of December. Apparently, the hatchery in Anchorage sends out eggs that have been fertilized a slightly different times and have been developing longer than others. Therefore, we witnessed eggs hatching right around 400 ATUs, which is normal for Coho salmon. I am expecting that we will still have some eggs that haven't hatched by the middle of December, but most of them should be hatched. Keeping my fingers crossed. 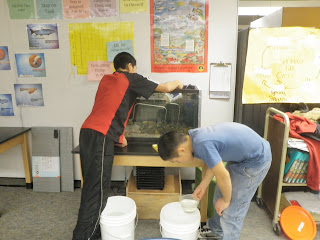 The students have been very willing to help maintain the water quality of the tank and to help remove eggs that died before hatching as well as some alevin that didn't fully emerge from the eggs and thus died. When the alevin start hatching, the embryonic fluid inside the eggs starts to build up and create a foamy layer on the top of the water. This is a critical period of time for maintenance and doing water changes to minimize the amount of foam in the water. These embryos require very high water quality and will die if toxins build up and don't get cleared out. In the natural environment, this embryonic fluid flows on downstream and allows the alevin to develop in the fresh water. 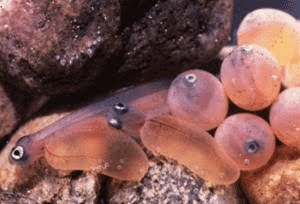 Thankfully, the alevin do not need much maintenance after they have hatched. The carry a giant yolk sac, like some grotesque, over-extended stomach. This is their food supply for the next 4 weeks. So when I return from Christmas break in early January, I will most likely find that some of the alevin have "buttoned up", meaning they have used up their yolk sac and will be looking to start feeding in the water column. During this time, the salmon fry will shoot to the surface and take in gulps of air to help inflate their swim bladder, which will enable them to maintain their buoyancy level in the water column. The tank will take on a whole new look. Then again, since this is my first experience in raising salmon in the classroom, I'm not really sure what to expect when I get back to my classroom. We'll have to wait and see.
Stayed tuned!
Posted by Dirk Martin at 3:49 PM No comments: