This weekend offered another unique opportunity, which I grabbed for a number of reasons. The varsity basketball team was traveling over or around the hill, depending on the route you wish to take, to Tununak for a basketball tournament. The team was just going to take snow machines (snow mobiles for those readers in the lower 48). I agreed to go along for technical support. I also got out of the Friday staff meeting, which is okay to miss every now and again. Because I don’t have a s 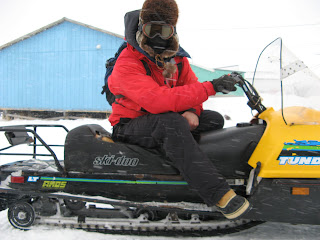 now machine of my own, I was stuck using our old school snow machine, a true dinosaur of the snow machine world. A Ski-Doo Tundra II. I felt like I was riding one of those “old school” bikes with a banana seat, coaster brakes and tassels on the handlebars. Everyone else was sporting their newest Yamaha speed machines. To put it in perspective, their snow machines could easily top out at 80 – 90 mph, while I would be lucky if I could hit 40 mph. No one got above 40 mph thankfully, because I would have been left in the snow dust. Needless to say, Katja had to stay home for this adventure. She was sad.

I ended up traveling over and back three times with Marty our Athletic director and NYO coach. Marty has a pretty fast machine, although it is a few years old, and was hitting all the jumps along the way, flying several feet into the air on occasion. I was just putting along, trying to keep from tipping over. We covered the 7 miles in about 15 minutes, which was moving plenty fast for me.

The basketball team stayed over night in Tununak because they were playing both Friday and Saturday morning. Marty and I went home on Friday night around 10:00 pm with a couple of other friends from Toksook. It was very dark out and neither 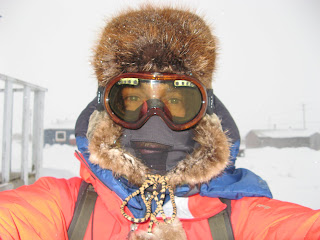 Marty or I had head lights on our machines, but we had head lamps. Anyway, it was quite an experience riding in between the two machines with lights. Occasionally I couldn’t see the trail ahead of me at all for a few seconds, then it would appear dimly again as I used the lights of the machine behind me. When we returned on Saturday, it was starting to storm, so we decided to follow the power lines to keep from getting lost. Here is a picture of what I was wearing when I was outside. Notice the new malaggai (seal skin hat). I didn’t feel any wind or cold at all. I highly recommend getting one if you are going to be out in sub zero temperatures for extended periods of time.

Last year, I seem to remember a steady harsh winter, except for a few days that were a little warmer (30 - 35 degrees), sunny, with a blue bird sky and I was okay with that. This year has been a little different. Last week, our temperatures stayed above freezing for 3 - 4 days and it rained and sleeted, which melted more than half of our snow base. Bummer! Katja and I got in some wet hikes, but it wasn't much fun being outside. I guess we can attribute this to global warming. I'm sure there are some polar bears and bearded seals farther north that have it rougher than we do.
Now, the weather has turned again. The winds are blowing out of the North and Northwest, the temps have plummetted again and the snow is drifting something fierce. Yesterday, Katja and I went out for a long ski. I left Katja run free from the towline for a while and I climbed up to the top of the hill. It was a long stren 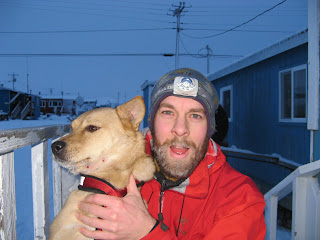 uous workout, but it was worth the ride back down. My skis were a little sluggish in the snow for some reason. I finally realize why there are so many different types of wax for skiing in different temperatures, although I don't use any wax on my skis, I just slug along. I hooked Katja back up for our trip down the hill again and she was able to keep me moving pretty good. Sorry, no video this time. I was able to help keep us moving on the flats and slight uphills because I wasn't holding a silly camera.
By the time we got back down, Katja and I both had pretty wicked ice beards as you can plainly see. You can probably also see that Katja is recovering well and healing from her encounter with a gun earlier this year. I think she might have some permenant bald spots under her neck from the scars. Hopefully her fur will grow back and cover that so that it doesn't get frost bitten.
Speaking of frost bite, I'm not sure if we will get out today or tomorrow for that matter. The storms are really cranking right now and the drift is growing up to my window sill in my kitchen. It's goggle weather outside right now and since Katja doesn't have goggles, she prefers short trips outside to go to the bathroom and that's about it. Yeah, I know. She is a fair weather dog. I'm trying to toughen her up though.
Anyway, thanks for staying tuned. Until next time,
Happy trails!

Dirk and Katja
Posted by Dirk Martin at 9:41 AM 1 comment:

Hi all,
Welcome back! Since my return on Jan. 4th, Katja and I have been tearing up the frozen tundra with the skis. It has been a little shocking to readjust to the harsh climate of the region, but we are managing pretty well. Here is a little video to prove it. Enjoy!