This video is very old and should have been posted back in October...but better late than never. This was my birthday weekend and really made it a very memorable birthday for me. Traci Buckle, my roomie, and I decided to play at a benefit concert for the Bethel Council of the Arts. Actually Traci talked me into it and I'm glad she did. If it wasn't for her, I would never have dreamed of doing something so random as play my Ukelele and sing in front of 100 plus people. It usually takes me a couple of drinks (liquid courage) to get the gumption to perform in front of a crowd of strangers and since there are no bars in Bethel (yet...) I needed something else to motivate me. I don't think I'm a horrible singer, but I sure was glad Traci was there to enhance our vocals.

I bought a Ukelele on a whim back in late July for $40 and brought it out to EEK, Alaska, mostly because it would be easier to travel with than my big guitar. I found it very fun to play and it complements the guitar pretty well, at least according to Traci. Occasionally we fill our cozy home with music laughter that sometimes draws our neighbors over to join us. I only wish that I had gotten it when I could have practiced and played with some of my other Ukelele playing friends, Kale Iverson and Josh Cridler. Oh well, hopefully our musical paths will cross again soon.

Thanks to Erin Kavanaugh for shooting this video and teaching me how to upload onto Blogger. She was a big part of energy that we emitted on stage that night. 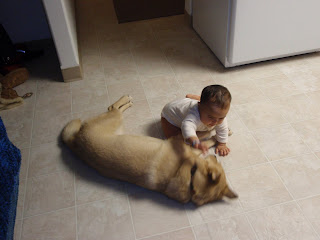 Wow, what a great Thanksgiving Break I had. Traci and I had been planning to have a somewhat larger get together for the holiday and were very excited. A couple of friends flew in from outta town. Tania and her daughter Justine flew in from Toksook Bay and our dear and close friend Erin flew all the way from Bethel with her dog, Capt. Macy (20 min. flight). We spent most of Thursday cooking up a storm. Blueberry Cheesecake, Apple pie, Pumpkin pie, and Chocolate Peacan pie were on the dessert menu. Sweet potatoes, stuffing inside and outside of the turkey, two different ki 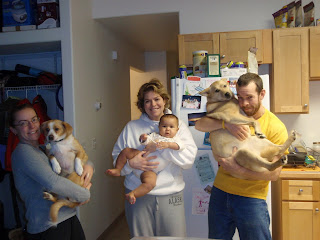 nds of cranberry relish, Garden salad, mashed potatoes, green beans, home made bread, and of course a giant turkey. It was pretty awesome!

Katja got plenty of attention too. She took over as guardian for Justine and was really amazing at entertaining her. Katja would walk over to Justine and just flop over on her side. She would literally let Justine crawl all over her and just lay there and take it, as if it were one of her own puppies. I never would have guessed she would respond that way. Erin and I got the dogs out a couple of times for some late day, virtually night time runs. There was plenty of knitting, by the ladies of course. I don't know how to knit. I did tie some flies though. Just getting ready for summer. We played lots of music as well. Justine loves to listen to music, either live or on TV or ipod. We had a fantastic time watching her dance around the coffee table with a giant smile on her face.

Anyway, I hope you all had a wonderful Thanksgiving as well. I look forward to seeing some of you over the Christmas break.
Posted by Dirk Martin at 6:31 PM 3 comments: