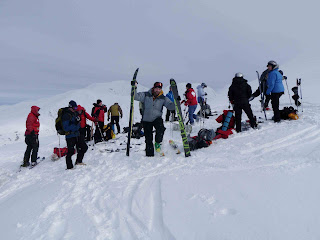 This spring has brought many new adventures that have taken me to new levels of accomplishment in both skiing and living off the land.  I'll focus this post on skiing.  Back in late February, I joined a group of skiers as for the Sugar Ridge Back Country Tour which was put on by NSAA (Nordic Ski Association of Anchorage).  I don't own any Tele skis or back country equipment except for an emergency shovel, so I rented some gear from AMH (Alaska Mountaineering and Hiking) and made some other purchases from REI, including an avalanche probe and avalanche beacon.  The group I was with included about 6 members of the NSAA back country ski patrol and avalanche safety instructors.  Needless to say, I felt that I was in good hands and no one would leave me in the back country.  We had a great day of skiing and were completely exhausted by the time we returned to the cars. 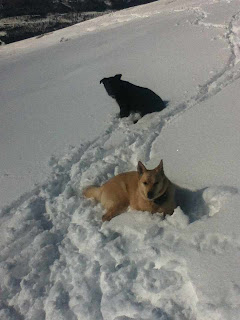 I returned to Anchorage again in early April only this time, Katja was along for the adventure and I was my own back country guide.  Again, I rented gear from AMH and talked to some locals at REI to figure out where I could go.  I was led to the Ram Valley, near Eagle River, which turned out to be a day of steep climbing and bushwhacking.  That's what I get for trying to find my own way up a mountain.  Katja and I met an unexpected ski buddy, Lyra, that followed us all the up and back down to the car. 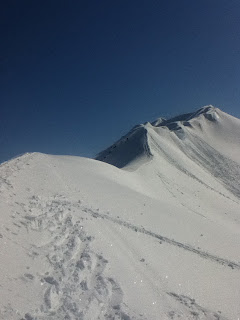 The next day, I decided to follow someone else's tracks so I drove down the Seward Highway to a popular ski area called "Tin Can."  The lower part of the mountain was very crusty, but the upper sections were nice and powdery and the weather was very sunny, so things started to really soften up by noon.  I made it near the top of the front face and decided I was high enough.

Great adventure!  I think I discovered my new winter passion, Back country tele skiing.  That means two things.  One, I get to buy more gear and Two, I get to visit the Anchorage area more often.  Both are pluses.

And finally, I apologize for keeping my followers in suspense for so long.
Posted by Dirk Martin at 6:00 PM No comments: