This post a few weeks old, but I wanted to have some pictures to show you as well. I got a chance to visit Quinhagak, AK to visit some friends and take a trip up the Kanektok river in search of Rainbow trout. I got into the village on Friday evening and met up with my friend Milt who helped me finalize plans with one of the local fisherman.

The next morning, I met up with my fishing guide and another teacher from the school. We loaded the boat and headed up river for about 1 hour. Our first stop landed us in a pa 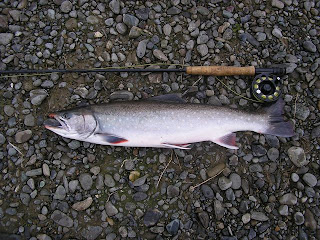 rt of the river that hosted many Cohos, Dolly Varden, and Rainbows. I managed to hook up with all three species which was my goal. That was the first rainbow that I had caught since I had been in Alaska. That actually sounds a little embarassing when I say it outloud. Hmmm??? I fished downstream a little more and hooked a Dolly that had to measure at least 24 inches.

We left that spot and hit a few other hotspots in that region of the river. We fished a section that was just inside Togiak National Wildlife Refuge and I got into a pod of Dollys. I must have hooked 20 Dollys in about an hour. It was laugh outloud fishing even though I landed less than half of the fish I hooked. After a while, I walked farther downstream to fish a tail out section. I rigged up with a double egg and large split shot to entice a nice rainbow. On my first cast, I laid my double egg rig out on the edge of the current and a huge rainbow came up and swallowed my indicator whole and took it right down to the bottom. My heart stopped, because I knew that I couldn't set the hook on the monster. The hook was no where near its mouth. I made several other casts, but I never saw the giant again. I left the hole with heart ache. 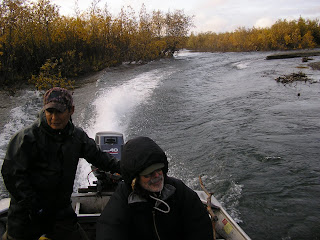 Later, we crossed the river and fished the other bank. Just standing and fishing on the bow of the boat, I saw some huge rainbows making their way upriver. Unfortunately, I wasn't able to hook any of them.

I was astounded when I looked at my watch and it was already 5 pm. We had to start heading back down river towards home. We did stop a couple of other places on the river as we made our way back down. During one stop, I waded down stream and crossed the river to a deep blue hole that was the confluence of two sections of the river. I made a couple of drifts at the upper end of the hole, but it wasn't until I let an egg sucking leech dead drift down into the bottom of the hole that I hooked the fish of the day. At first I thought i 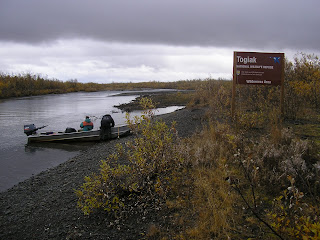 t was my trophy rainbow. The fish made several strong runs and it took a while before I could actually get a glimpse at it. Eventually, I landed a very nice Coho that had just started turning its color from its Ocean fresh chrome silver radiance to its light reddish tones. I gotta tell you, I was a little disappointed that it wasn't a rainbow, but it was the hardest fighting fish that I hooked all day.

I can't wait to get back on the Kanektok river.
Posted by Dirk Martin at 9:41 PM 1 comment: