So it has been a long time since I have actually stood on a river with a fly rod and it seemed that I would not be able to fish again until June. I actually got a chance to do something that I previously had absolutely no interest in doing. It involves a shovel or auger, a wooden one inch dowel rod (about 2 feet long), 30 pound test line, a huge lead weight the size of a chihauhau, and a treble hook with some fish flesh as bait. Oh and lots of really warm clothing. Ice fishing is nothing like fly fishing at all, but it surprisingly has its own style and technique here in Bush Alaska.

I was skiing along the coast yesterday and saw some people out on the bay not too far away, ice fishing. I, being the curious and social person that I am, skied out to see what this Eskimo tradition and lifestyle is all about. One of the fisherman turned out to be an eighth grader that I know fairly well. He caught a couple of fish and then asked if I would like to try. I unclipped out of my skis, which probably removed that chance that I could have done something totally unique in the sport of fishing, fish with skis on, and took the stick he handed me. Basically, it is a dowel rod with line tied on the end and then wrapped around the end of the stick. Winding or unwinding line off the stick allows you to adjust the depth your bait sits in the water. You generally want your bait not more than 12 inches off the bottom, because the closer you get to the top, the colder the water is and the less fish you will find. On the other end of your line is a pretty big lead weight and a treble hook tied about 8 inches from the weight. The bait was a small piece of smelt (type of fish). You lower your line in the water until you find the bottom and then lift your stick about 6 to 12 inches. Occasionally you can gently raise your bait a little higher and then lower it back down. Eventually you should feel a little nibble and you just lift the stick to set the hook. Then you lift the stick above your head, grab low on the line, bring the stick back down below where you grabbed the line and lift under the line again. By pulling the line to the side with your hand and then lifting the line with the stick again, you should be able to bring your fish out of the hole in the ice and let it lie on the ice. Generally it is one quick motion and your fish is lying on the ice. Then with a quick tap on the head, you should be able to put the fish out of misery. Pull the hook out and drop it back in the water. This whole process can take about 10 seconds for some of the natives I have watched. Yeah, most of the time spent ice fishing is just ........ standing there, holding a 24 inch stick, and jerking it in the water everyonce in a while. I haven't seen too many women doing it. I guess it's a guy thing.

People can catch up to about 50 fish in a few hours this way. Most of the fish you catch are Tom Cod, which are only about 12 inches long. You can also catch smelt, which are generally used for more bait, but can be fried and are very tasty as well, according to some native friends I talked to. The fishing hole is only about a mile from my house, so it would be easy to ski to on my own. A lot of people travel about 20 minutes by snow machine to the Toksook River, which is near Night Mute (a neighboring village on Nelson Island about 20 miles southeast). Anyway, the Toksook River has lush fish, which are considerably larger (about 15 - 25 inches). I hope to travel there sometime and give that a try.

Make sure you bring some food, lots of hot coffee, and plenty of really warm clothes. Fishing license???? forget about it. I'm sure that ice fishing in Alaska is a very different experience from ice fishing on the great lakes somewhere. For one thing, fishing here is done on the bay, which due to the tides, develops cracks from the water swelling. Plus it is salt water, which does take a lot lower temperatures to freeze. Don't worry, it's cold enough up here. 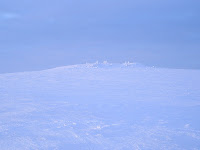 So here is a picture of the top of the hill from my last skiing adventure. Again, there is absolutely no wind in this picture, which is very very rare. Still, if anyone is getting a little warm in the midst of the unseasonable weather we are having in the lower 48, just pull this picture up and you will hopefully start cooling down immediately.

The stone people, occupy the top of the mountain, supposedly where the little pe 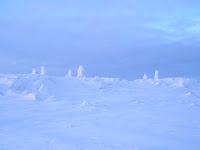 ople live as well. If you recall from one of my earlier posts, the little people are tricky, thieving, little people that live in the cracks of the rocks and come out when it is dusk or dark. This time of the year, we didn't really have to worry about them. Hopefully they are deep in their little caves eating frozen seagulls or musk ox patties. This is just a close up of the stone people. The stone people were built by the earliest inhabitants of the area in order to help them herd Musk Ox. Apparently Musk Ox are not so smart and thought the stone structures were actually people and they ran away from them back towards the real people with guns. Silly Musk Ox. There were several students and teachers that left Toksook today in order to go to Chefornak to get their Musk Ox tags so they can hunt them this winter. Apparently there are only 35 tags available, so they have a drawing and you have to be there to get your tag. Otherwise you go Musk Oxless for the winter. My goal is to see one.......from pretty far away. They do charge and I'm not that fast on my skis.

Anyway, make sure you lock your doors at night and hide all your valuable possessions. There may be little people watching.

Talk to you soon,
Dirk
Posted by Dirk Martin at 7:00 PM No comments: 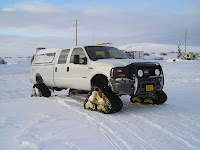 For those of you who really like trucks.......check out this bad maama jaama. I don't think it would be road legal down in the lower 48. Thank goodness we have no roads up here. In most of alaska, you have to make your own.

This rig belongs to one of the construction crews here in the village. I could probably rent it for $100 an hour. They have driven this 20 miles over the frozen landscape to Night Mute.
Pretty wicked! See ya out on the Tundra, Dirk
Posted by Dirk Martin at 6:51 PM 1 comment: 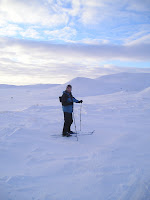 Hi everyone. So I know it's been a while, but it's not because there is nothing going on up here, believe me. I just struggle with time and when the time is there, I struggle with finding the energy, but I know that I have a band of people eagerly waiting to hear my next adventure, struggle, experience, or conundrum up here in Alaska.

Well I went out skiing with Kevin, a friend of mine here in the village and his dog, Foster. It was a beautifu 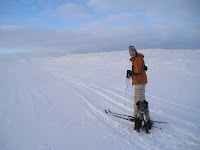 l day and we skied up the snow machine trails to the top of the hill where the stone people or little people live. We got a nice view of Tununak on the other side of the hill and then headed back down on the back side of the mountain where there are not any snow machine trails, which means the snow is very inconsistent and difficult to ski. Picture a wind blown field with areas of ice, areas of 2 - 3 foot drifts of snow, the whole thing randomly dotted with chunks of ice to manuever around. It was a little sketchy to say the least. We made it down eventually and I only suffered a couple of bruises, including my ego, and some sore muscles. I almost bent one of my poles from falling on it so hard.

It was a great day on the mountain, very rare in deed. There was no wind blowing on the top, which is unheard of here in the village. Skiing along the coast is nice also. There is more protection from the wind and there is nice snow that sweeps over the bluff to climb and make a couple of turns on the way down. I did not have my camera with me for that trip, so you will just have to believe me that we came within about 70 feet of a red fox that was checking us out. Pretty amazing.

Thanks for reading.
Dirk
Posted by Dirk Martin at 6:26 PM No comments: