The River of Frozen Dreams 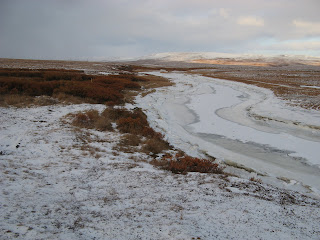 Winter seems to have taken a firm grip on the land over the past 4 weeks, but we still don’t have much snow. I figure that it will probably warm up around the beginning of November, although I really hope it doesn’t. The snow that we got 3 weeks ago is still hanging around and towards the end of this week, we got another inch of powder. The temps have not gotten above freezing the whole time though, so the ground (aka soggy spongy mattress ground) has been hard as a rock for some time now. This makes it perfect to ride on, so Katja and I have been cruising up along the river for evening rides. The river itself is a little sketchy to ride on yet, although I have seen 4 wheeler donuts out on the middle of ice. I’m not going to risk it though. We can ride about six miles in about an hour, but only 2 miles of that is on the tundra. Tundra riding is still pretty slow going.
Fishing would be so much 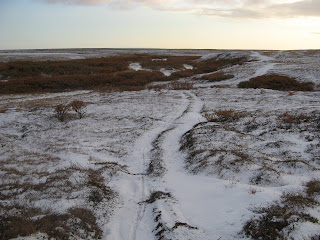 easier if I could ride all the way up to where the Dollys are hanging out. It takes me about an hour to get to the fish when the ground is soggy and boggy, but only 30 minutes from my house when the ground is frozen. It is hard to believe that I was fishing this same water about 1 month ago. Many things take forever up here, the mail, traveling, etc. The weather happens very suddenly.

Today, Katja and I went on our mountain circuit ride where we ride up to the top and then maneuver our way down the other side without getting killed. With snow on the ground it’s a little softer falling, but you end up falling more often, so I guess it evens out. I went over the bars a couple of times today. We had a great ride though. I must have been really focused on keeping the rubber side down, because all of the sudden, I saw blackness in front of me and hit the breaks as hard as I could. Too late, my front wheel sunk 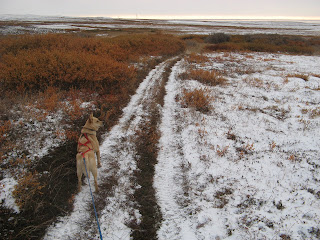 into the murky blackness and I had to catch myself, which meant that my foot sunk down into the bogginess as well. Surprisingly I was able to pull my foot out quick enough so that I didn’t get too wet. I tried to sneak around where the ice seemed a little thicker, but I broke through again. I quickly decided that I made a wrong turn and backtracked to another trail that headed up towards higher ground. Katja did amazingly well the whole time we were out. She is leaps and bounds ahead of where she was last year as far as skijoring (bikejoring) is concerned. I’m really looking forward to this winter when we get the skis out.
Posted by Dirk Martin at 7:02 PM No comments: 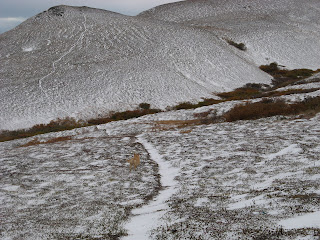 I know that I'm getting too excited too early, but I can't help being energized with the first snow fall. Katja was pretty excited as well. Once again, she can get a mouth full of snow, which quickly becomes ice cold water, at full stride to stay hydrated on our endurance adventures. Early this week, we took a quick spin around the 3 mile x-country course after the ground has frozen hard and there was a light dusting of snow. The trail is alittle easier to pick out with a light snow. It's pretty difficult even in the best conditions. The wind was blowing pretty hard up on top of the ridge, so it meant that I cooled down quickly when I had to stop and round up my adventurous run away dog, who had taken off on another quick side venture. She has gotten much better at staying near me when we run, but there is just so much to explore out there, she just can't help herself sometimes. She healed the rest of the way back to the village, so I treated her to a left over steak bone in my fridge. The next day she in turn treated me with a nice steamy pile of poo outside my bedroom door. I guess on top of the dog food, the steak pushed over the edge. I decided to leave out any photos. That hasn't happened since the first few months she lived with me.

Today we rode to the top of the hill and then when off trail over the side towards "the thumb" to pick up another trail that winds around behind this ridge and follows the wide valley below. Again, Katja took 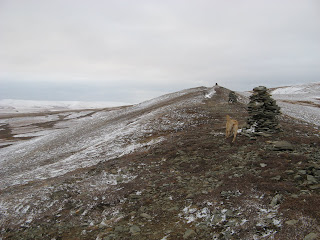 off returning after a period of shouting for her. I was getting concerned that she had come across a fox and gave chase, which could last for a long while. I hope that never happens. Upon returning, I scolded her for running off and then we continued down the hill, following the snow filled tracks of the 4 wheeler trail. We flushed a nice size covy of ptarmigan, which normally would entice Katja to take off again, but she was able to contain herself this time. I guess she connected the dots. It has been cold enough that even the swampy ground is fairly frozen enough so that I don't sink my front wheel through boggy sections of the trail. We got back to the town relatively dry and worn out. Another successful outdoor adventure.
Posted by Dirk Martin at 5:21 PM No comments: