The weather has been warming up some recently and it's actually been in the high 40's and low 50's lately. Still it takes a long time for 5 - 6 feet of ice to melt and clear out of the bay. Well this week, the firm ice pack that I so comfortably rode my bike on to go ice fishing, finally broke up and started clearing out of the bay. I didn't realize how much I missed open water until I saw the frigid blue water and the ripping outgoing tide pushing all the mini icebergs out to sea. 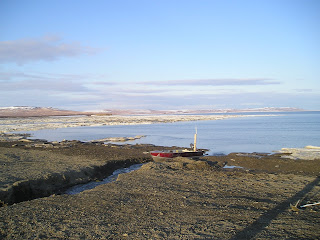 tty tightly around the head of the bay. It was about 45 degrees and around 10 pm when these pictures were taken.

Many of the men and boys have been going out seal hunting for the past couple of weeks. Students actually get excused absences, called traditional leave, to go out and seal hunt to contribute towards part of their subsistence lifestyle. Apparently there is the possibility of seeing a seal or beluga whale in the small bay during this time of year as well. I'm keeping my fingers crossed. 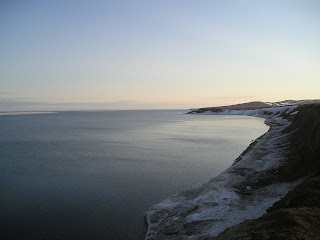 It is so nice to see water again! 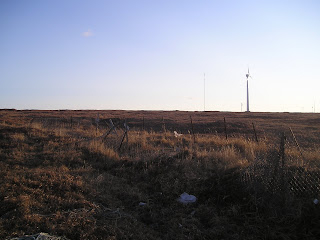 This picture has an old cemetary from the village in the fore ground with one of the wind powered generators in the back ground. Kind of mixing a little old with the new. Apparently there are human skulls that can be seen in this graveyard, but I didn't want to go digging to find them. I was worried about being haunted just for taking this picture.

This is a picture of fish drying racks that they make to hang their herring, Salmon, and other fish from to dry them for later use. I recently had a chance to try some cooked dried herring and it was the strongest fishy tasting fish I have ever eaten. I couldn't even finish it, but I ate enough to let people know that I really tried to like it. 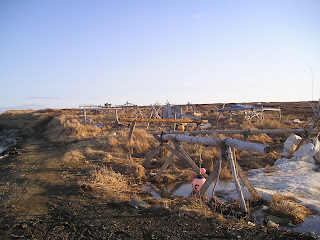 Here is Jamie, enjoying a cool north wind on top of the bluff just outside of town. 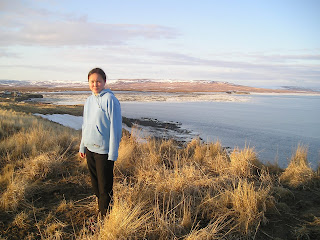 Well, that is all for now. I have almost survived my first year of teaching out here. I have only 5 more days of teaching to go. It's definitely been a challenging year for me, but I have also had many rewards that have helped me to decide to teach here next year as well.

I'm excited to see many friends down in the lower 48 over the summer.
Thanks for reading.
Dirk
Posted by Dirk Martin at 6:00 PM No comments:

You would not have know that you were in a remote fishing village in Western Alaska if you were at the Nelson Island High School prom last week. Of course once you stepped outside the gym, you would slapped back to reality pretty quickly.

Our prom was held for all students in grades 7 - 12. About 65 people attended, which included a lot of people from other villages. For many people, it became a reunion of familiar faces that used to attend Nelson Island School and other people that were from the community.

The students were totally decked out from head to toe. Gents had all their bling bling out on display with a nice button down shirt or vest. A couple of guys even sported a penguin suit. The girls were all dressed up as well, wearing their fancy and elegant dresses.

Jamie and I attended even though I was feeling very sick that day and was tempted to stay home, but I caught a quic k 3 hour nap and popped a couple of Alkaseltzer Cold Plus tablets and was good to go until about 2 am. After everyone left, I hung out with the DJ and the two site administrators for some good laughs about how everyone in the village drinks and that if anyone should be allowed to drink, it should be the teachers. That day is a tiny speck far, far down the road of possibilities. Anyway, a good time was had by all.

Thanks for reading,
Dirk
Posted by Dirk Martin at 5:45 PM No comments: