I've been in Alaska for almost 4 years now and have yet to see a dog mushing race. So, when a couple of friends mentioned that they were going in for the 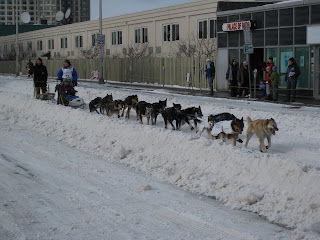 2010 Iditarod and the Tour of Anchorage nordic ski race, I jumped at the opportunity. I asked for a couple of personal days to allow myself a relaxing stay in Anchorage without having to rush back to work right away. I'm glad I did that, because I had a hard time walking around after my ski race.
I stayed with some friends 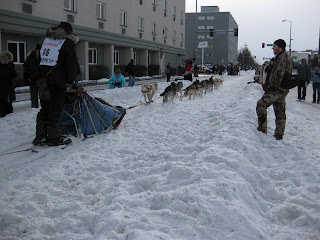 from Eagle River, which sits right at the base of the Chugach mountains. My friends stayed downtown Anchorage at the Millenium hotel, which happened to be the base of operations for the Iditarod Race. The lobby of the hotel had tons of gifts and memorabilia for purchase and there was always lots of people mingling around the tables and displays. 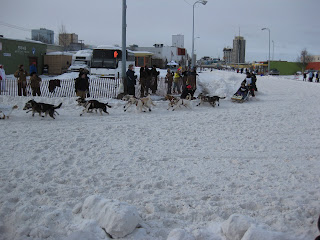 Saturday morning was the ceremonial start for the Iditarod. The first musher started around 10 am and others continued a staggered start every two minutes until around 1:00 pm. They ran the dogs about 4 - 5 miles around Anchorage. The city of Anchorage had to truck in tons and tons of snow to fill the streets of town so the dogs could actually pull their sleds. The official start of the race was Sunday at 2:00pm in Willow, AK near Wasilla where there was plenty of snow. We were concerned about parking, because "Fur Rondy" had 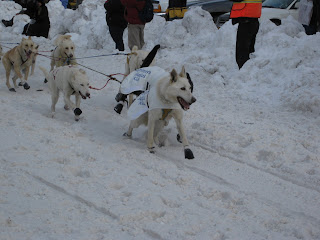 been going on for a couple of weeks and downtown had been crowded the whole time. Fur Rondy is a two week celebration focusing on the Iditarod, Native Arts, and culture. We happened to find relatively close parking spaces near a part of the course that was not too crowded. We were able to stand right on the edge of the course near a corner with plenty of space to take photos and catch the candy filled dog booties.
The race is coming to a close with three top contenders battling it out. Lance Mackey is in front with Jeff King and Hans Gatt closing in from third position. If you want to follow closer, check out the following site, http://www.iditarod.com/ to read all the stories. Now in honor of celebrating the winter season with your dog, I'm going to go skiing with Katja. See ya!
Posted by Dirk Martin at 12:38 PM 2 comments: