Adventures on the... EEK! 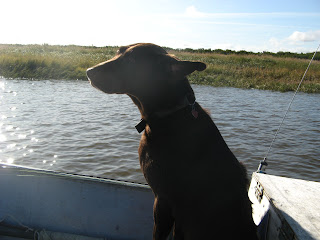 Yesterday, I headed up the EEK river with my fishing buddy, Seth. This was our second trip up the river. The first time we went up, there were not any fish to be seen in the section of river we were on. I was with Seth, his wife, Janine, their son and Seth's mother. We did have a nice evening picnic on a gravel bar after some fishing and berry picking. We just didn't catch anything.
This second trip up the river, Seth was determined to get up river to where the fish were. We traveled up river for about 1 1/2 hours before we stopped the first time. Seth's dog, Ginger, really enjoys boat rides and looking for water fowl along the way. Apart from the water fowl, we looked for quiet water in the confluence of side creeks and big bends in the river with deep eddies that were next to the 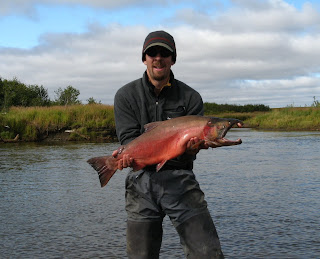 main current. The first fish I landed was a 25 inch northern pike. We were both excited for the first landed fish, but I knew there were salmon in the area as well. I walked up stream a little cast out in the middle across a slow moving eddy, allowing my fly to sink down to the bottom and then retrieved it up through the eddy. Boom...fish on! A nice medium sized silver salmon that we decided would be lunch for the day. About 5 minutes later, some other fishermen joined us and I landed my second silver. Another boat came down and pulled up to the beach across from our fishing hole. They said the fish were everywhere 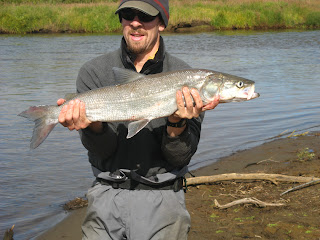 up stream a little ways, so we headed up. There were a couple of boats already there, so we pulled up on the point where the river splits into two branches. Seth then headed up river to check out some native land that was handed down to him through his family. While he was gone, I hooked a big, bright red male. When Seth came back down, we fished a little longer and then headed back down to eat our fresh salmon lunch and start back down river. We fished the big eddy bend where I caught the two earlier salmon. I was on my last c 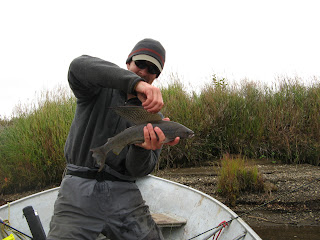 ast, reeling my line in and BOOM! Fish on! This time a Shee fish grabbed my fly and set off running around the eddy. After landing that fish, we went to shore. Seth and I pretty much finished off a whole salmon between the two of us, which set us both into a food coma. Hanging out on a beach on the EEK river in sunshine, bellies ful 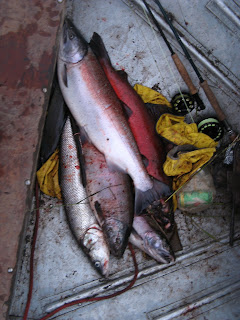 l of fresh salmon. Life doesn't get much better than this.
After fishing some more, with no more hits, we started drifting back down stream, bouncing off the shore and tree branches and whatever else got in our way. We decided it was better to use the outboard to position ourselves better for casting into the bank. I hooked a couple of Grayling and then we saw some fish working in the mouth of a side creek. We drifted the area about 6 times and hooked up with a pike and another big bright 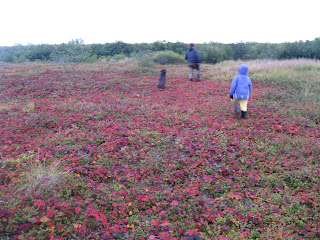 silver. Seth hooked another silver, but it spit the hook.
After that we decided to head back towards home. Stopping a couple of places along to way, Seth told me about families that had lived way up on the river in the early 1900's. We visited a grave site where an entire family was buried, the latest having passed away back in the early 1940's. We didn't get home until 11:30. I was still cleaning up the kitchen from filleting fish at 1:00 in the morning. What a long day! What a great day!
Posted by Dirk Martin at 11:04 AM 2 comments:

Well, it's been a long time my friends and I apologize for that. It was truly a great summer at home in Maryland. Lot's of traveling during the month of June. Bonaroo, then up to Maine for some fun and recreation with some Alaska friends as well as some reconnecting with old friends up there. A little bit of fishing, great 4th of July celebration, and lots of driving around in my Nissan Versa. There was still lots of time spent with family, although they would probably argue that it wasn't enough. All in all, it w 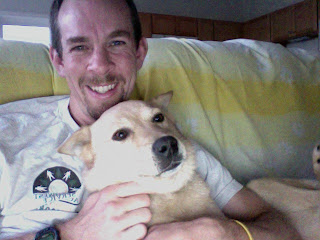 as a great vacation.
Now it is back to Alaska, to settle into a new village, explore new terrain, teach new classes, get to know new students and staff, and continue the adventure. So far it has been pretty wonderful. My students are still upper elementary and middle school students, but they do show a huge amount of respect for teachers and staff. I am currently teaching "middle school", which includes some 4th graders, 5th, 6th, and even some 7th graders. It is a widely differentiated class, especially with Math and Reading. My overall schedule is pretty sweet. 8:45 am starts out with High School P.E. class, then U.S. history, Math, Reading, and finally lunch. After lunch is Science, then my prep, and lastly middle school P.E. All my students are having a great time playing soccer right now, although they are eagerly anticipating me starting a basketball unit. That I will try to hold off until March.
I've also started coaching X-country. Actually, they haven't had an active team in over 7 years, so I"m kind of starting the program back up again from scratch. None of the students on the team have ever run x-country before, so it's been a slow start, literally and figuratively. Today the high schoolers ran 4 miles and the middle schoolers 3 miles. They are definitely showing a lot of progress and seem to tolerate my authoritarian coaching style, if you can believe that. I hope to have an inter squad meet in a couple of weeks with just EEK students competing against each other. I also want to travel to Bethel with a couple of students if our minuscule budget will allow it.
I have tried the local waters for fish as well. I rode up river about 45 minutes with a family that works for the school. It was a fun, but chilly boat ride. We didn't catch any fish, but we had a wonderful dinner on the beach and to top it off, we came dangerously close to running out of gas. I think we are going to try heading up river again next weekend, so I will keep you posted.
I think that is it for now. Stay tuned for more exciting news from EEK. New posts will follow more regularly now that I'm back to work.
Thanks for reading,
Dirk and Katja
Posted by Dirk Martin at 10:39 PM No comments: