So I am starting my 6th week of teaching tomorrow. I can't believe it myself. Next week is October. Time is really flying up here now. I am busier than ever with my teaching and keeping track of all the information for our math, reading, and writing students.

The 7th grade class has really been pushing their limits with me and I have had to drop the hammer of justice on them a couple of times. I am going to wear the hammer on a holster by my side for the rest of the year. I'm still learning tons of new information about this field of teaching, although it is making me gray. 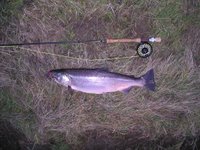 probably my toughest week so far with everything from disciplining students to coming up with meaningful assignments for my six subjects that the students enjoy and learn from. By the end of the week, I was totally fried. So this morning I went hiking up the Tundra and did some fishing.

My first Silver on the fly rod. Yeee - haa!
And now it's back to the grind stone.
Thanks for reading.
Posted by Dirk Martin at 1:13 AM 1 comment:

Pictures of the Berry fest.

Here is our number one varsity runner on the ridge during the X-C meet. Maybe?

All right, maybe not.

Today was another unique experience for me in the village. A native woman in village passed away earlier this week after battling cancer for a couple of years. The whole village was at the funeral. We let students out of school at 1:45 today so they could attend. The woman was the mother of one of my students. It was pretty difficult walking past the family and offering strength, hope, and prayers to them while looking at their deceased mother, aunt, wife, etc. She was only about 36 years old.

RIP
Posted by Dirk Martin at 7:28 PM No comments:

Last weekend was indeed the most fun I have had since I've been here. The weather was absolutely beautiful, which allowed all planes to travel without delay. Therefore, we had lots of people coming and going in the village. Saturday was the Nelson Island Coastal Classic cross country meet. There were about 6 schools and about 40 runners that competed overall. This photo is from the top of the ridge where they turned down a steep hill and returned to the village. I walked the course twice and I've concluded that this course was the most intense cross country course I've ever seen. Runners had to slog through streams and tundra, scramble on all fours up steep climbs, and negotiate technical downhills without flying head over heels. Our top runners in junior high and high school place first for their races. Many runners were left with their tongues dragging and their egos bruised.

Speaking of bruised egos, Saturday afternoon was a 3 mile fun run that I chose to compete in. The first place high school runner did the race too, not 2 hours after he finished kicking everyone's teeth in during the x-c race. Greg Lincoln, recent Toksookian, also did the race and both of these guys left me in the tundra dust. The next day was the bike race and I was hoping to return the favor on my trusty mountain bike, which I had just received in the mail the day before the race. No one seemed to show up except for a bunch of kids on BMX bikes, so I proceeded to make them look like slugs in the desert. Truthfully, as I sat up coming across the finish line, one of my 7th graders squeeked past me for the win. I did wait for 5 or 6 times during the race and he didn't even let me have my moment of glory. He deserved the win I guess. He got a new Walmart bike for 1st place and I got 50 bones for 2nd. Not bad.

There was also lots of berry picking, Agutaq eating, and fiddle dancing at the school. The fiddle dances were more like country music stand up shows. Hank Williams would have been proud. Lot's of people dancing though, until 2 am Friday, Saturday, and Sunday nights. All of the runners from different schools stayed in the high school as well, so it was a very busy place. There was native Yup'ik dancing at the memorial center in town and men and women from different visiting villages got decked out in the native dress and pleased the crowd with their story telling girations. The drumming and dancing combined is actually very energizing and quite the unique experience.
Posted by Dirk Martin at 6:58 PM No comments: