Fishing in the Fall 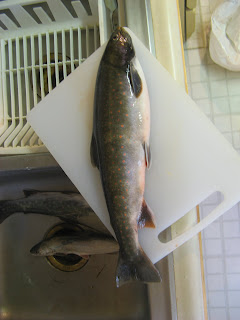 So last weekend, I made one last voyage up the Alakugaq to fill my freezer. I actually wasn't planning to keep any fish, but when I caught some good size fish, I changed my mind. I had decided to hike farther up river than I had ever been before. I also had dinner plans for 6 pm, so I knew that I couldn't spend too much time exploring.
I rode my bike as far as I could over the squishy tundra and then hiked the rest of the way. There were still many salmon swimming up the river, so I assumed that there would also be many Dollys following them to suck up their eggs. There were indeed a lot of fish in my usual fishing hole, but I wanted to explore farther up river, so I caught a few and then continued hiking
I knew that I was going to be wiped out at the end of the day, because I was already feeling tired as I hiked across the soggy landscape. Parts of the ground were solid and other parts were totally exhausting to get through. As I got farther up stream, the river got very narrow and the fish would spook and dart around
Posted by Dirk Martin at 5:44 PM 1 comment:

The "Hinter" of Hinterlands"

Nunuvak Island is beautiful, with its diverse coastline, its rolling hills and larger mountains in beyond, and its highly fish populated rivers. The village, Mekoryuk, sits on the eastern end of the island and the rest of the island rarely gets visited except by circ 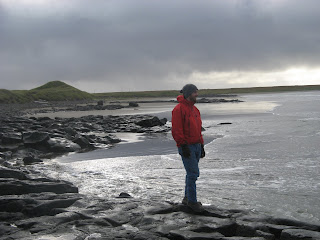 umnavigating the island by boat or taking a painstakingly slow, bumpy, and sometimes barely navigable 4 wheeler ride across the tundra. One nice thing about the village of Mekoryuk is that it is more sand than muddy, which is much easier to deal with as far as keeping your house and yourself clean.

It’s always exciting for me to see and explore a new place. Friday evening we to a 4 wheeler out to some big sand dunes on the coast and walked out over tidal flats and rocks as the tide slowly crept in. After taking some death defying leaps off the dune tops, we cruised back to town and starting cooking up a vegetable 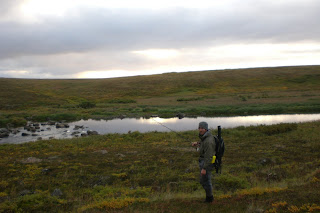 medley, many veggies we couldn’t even identify. A short jam session with Kale on Ukulele and me on guitar followed by some vaguely interesting tele and I headed to bead. Our plan for Saturday was to take a slow, bumpy, and sometimes barely navigable 4 wheeler ride over the tundra past the tidal section of the Mekoryuk river to search for Dolly Varden. Saturday, we slept in till 7:30ish, ate a quick breaky and head to the fishing grounds. Kale fished with a heavy duty spin rod and me with my 6 weight fly rod. The section of water was beautiful. A long slow, deep section of water in between to steep, bouldery rapid sections that h 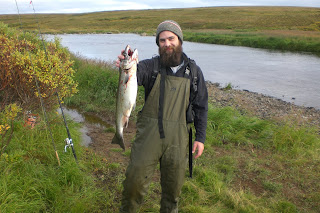 eld fish by the hundreds. We spent about 4 hours catching many Dollys and Kale even caught 4 nice silver salmon. It was much different than fishing the little river outside of Toksook. First of all, the Dollys didn’t aggressively take salmon egg imitations, which are an easy and rich source of food for them. Instead, they wanted to chase some kind, any kind, of streamer. Unfortunately, I only had a couple of flies that made the cut for appearance and actually caught fish. The weather had gotten cold over the past couple of nights and the wind combined with dipping your hands in water to release fish quickly turned my hands into numb clubs of wood. This lead to m 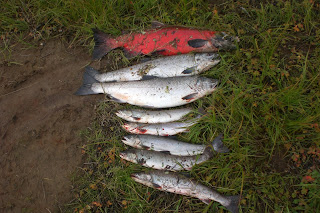 e dropping one the four flies, that was working for me, in the water, never to be seen again. Luckily I still had a couple of large nymph patterns that surprisingly worked just fine. I caught many fish, some 10 – 12 inches, but most 15 -18 inches. This was okay with me, because between Kale and I combined, we probably caught 80 – 100 fish in four hours. Sometimes on every cast you would have a fish. It was great.

After arriving back to Toksook the next day, I had felt like I had taken a week long vacation. But alas, back to work. I’m pretty happy that I got to see another part of the Yukon Kuskokwim Delta and I hope to get back out to Mekoryuk for another visit. Maybe Katja will join me next time.
Posted by Dirk Martin at 4:23 PM 2 comments:

Getting to the "Hinter" of "Hinterlands"

This past weekend, I made arrangements with my friend Kale, to visit him and some other friends at their current residence in Mekoryuk on Nunuvak Island. Then came the unpredictable adventure of making reservations to fly there. It isn’t far, just a short 20 min. hop across the Etolin strait. There are only approximately 170 people that live on the island, so there isn’t a high priority to fly there during all the scheduled flight times, morning, noonish, and evening. I made reservations to fly there on the Friday evening flight and return on the Saturday evening flight with one of the aviation companies, however on Friday evening when I went to confirm my flight, the plane was full. Aaaarrrrrrrrgh! Now my understanding of the concept of “reservation” was that my name was to be on one of those seats on the plane for that flight. After contacting the headquarters in Bethel, I dropped it and quickly checked another aviation company that was flying out to Mekoryuk as well to see if they had room for me. They did and I made it out to see Kale. Unfortunately I had to go through a similar scenario for my flight back to Toksook. I ended up making all my flights as I had originally planned, but I was never quite sure I would be flying until I was sitting on that plane. I should be used to this by now, because I have been jumping flights to and fro for almost 2 ½ years now, but I’m still surprised and frustrated when I’m really wanting or needing to make a flight and the plane just might be full or not come at all. To make a long story longer, there is always a certain amount of finger crossing that has to be done in order to get some places in the Alaskan Bush.
Posted by Dirk Martin at 4:22 PM No comments:

This year has been challenging and rewarding in many ways already. I've been trying to get my feet under me in the classroom. Each new batch of 7th graders that get thrown my way try to test their new teacher by driving them crazy. This years group is trying hard, but they aren't getting anywhere. Tough love! There is always so much work to get up to date for the new year as well that it takes me until about October to find my feet. I am almost there and it is still the 3rd week of September, so I think I'm doing pretty well. 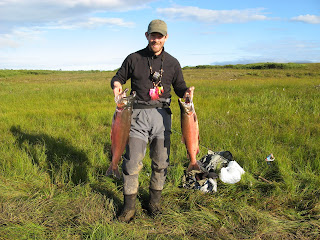 As for fishing, I have been rewarded and disappointed. The beginning of the Silver Salmon season was great. My first trip out, I landed 4 beautiful silvers as bright as the sun. Unfortunately, you will have to take my word on it, because I lost the pictures when my work computer crashed. I caught a few more after that and this is a couple of older males that were caught about a week later. I've also engaged my friend and colleague Marty into some flyfishing. He picked it up rather quickly and found success with a few fish. After a couple of weeks of being in th 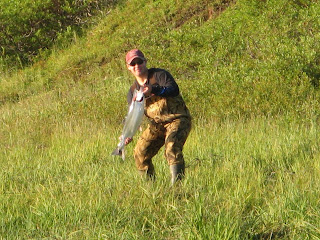 e river though, the fish just shut down. Maybe they get too skittish. Maybe they are getting too much fishing pressure from all the kids that try to snag them. Maybe they just can't be distracted from their spawning rituals and don't even bother to chase the colorful flies I throw their way. Either way, I can't get them to bite anymore. I would like to try a different river and see if less fishing pressure has an effect, but the other rivers require a fairly long 4 wheeler drive over the tundra. I don't think that I could even hike there and back in a day and still have time to fish. So I am left to fish the nearby Alukucaq.

Yesterday I hiked way up river and saw a couple of amazing things. First, there are many beavers that inhabit the river and build extensive dams and lodges along the river, sometimes backing the water up for long secti 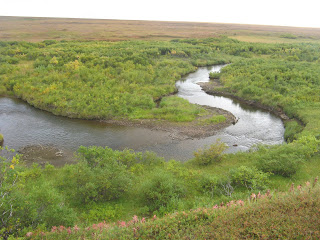 ons. Second, many many salmon still get up stream through the beaver dams and find spawning grounds way up river. Third, there are a couple of areas that have large groups of Dolly Varden sw 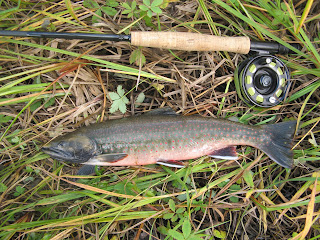 imming spastically around following Salmon and sipping eggs that drift down stream. On one of my first casts, I hooked with two fish at the same time. Eventually one of them shook the hook, but it was pretty exciting having two fish darting around on my line.

The fishing is starting to come to a close around here though and soon, winter will set in and I'll be forced to fish through the ice. Not a favorite of mine. This fishing season has been a good one. Maybe there will be one more adventure to Nunuvak Island next weekend for some more fishing. I'll keep you posted.

Until next time,
thanks for reading my sporadic blog

Dirk
Posted by Dirk Martin at 5:36 PM No comments: